Christian Di Bratto’s mom used to call him a “marketer’s dream” as a child.

“He enjoyed being marketed to. Not that he was gullible, but more like he’d buy into it and he’d enjoy the commercials,” Rosanna Luca said.

Now, at 19 years old, Di Bratto has become the marketer — raking tens of thousands for his lucrative influencer marketing business while attending his second year in university, full-time.

How did he go from teaching hockey part-time for $20 an hour at a local arena to where he is now?

Watching how the internet has changed business, especially when it comes to influencers.

“I’ve always been interested in how (brand) deals work behind the scenes,” Di Bratto said. He recalls his obsession with branding in the hockey realm — with the likes of Sidney Crosby cashing in millions of dollars to exclusively wear a brand’s merchandise.

“At the time, I thought that was the coolest thing in the world.”

In researching more into this world of marketing, he found a whole new genre with sponsored influencers and content creators. Most notably, Di Bratto remembers watching David Dobrik videos, a popular YouTuber with over 18 million subscribers and the partnerships he took up with SeatGeek, a ticket selling platform for sports, music and theatre events.

Dobrik’s partnerships with SeatGeek saw the platform pay for cars for his family, friends and strangers in exchange for ad spots in his videos, with videos titled “SURPRISING RANDOM PERSON WITH A NEW CAR!!” and “SURPRISING MY DAD WITH HIS DREAM CAR!!” — a tactic Di Bratto was instantly drawn to. So, he wanted to replicate it.

“I kind of just thought I’d give it a shot,” Di Bratto said.

On a whim, he sent a direct message on Instagram to Justin Escalona, an artist and YouTuber, with an offer to represent him to brands for a 15 per cent commission for whatever deals he brought in.

Di Bratto — a second-year real estate management student at Ryerson University — didn’t expect Escalona to respond, but, “for whatever reason,” he soon received a text from a number with a Chicago area code.

From there, Di Bratto started firing off emails to any brand that “has ever spent a dollar on a podcast” from his personal email account. “It was a shot in the dark,” he said, laughing at his inexperience with the influencer marketing field.

But one brand took the bait — a beef jerky company willing to pay for an ad slot on Escalona’s podcast, ‘No Filter.’

“I made that money typing on my computer. I thought that was crazy,” he said.

Starting university in the midst of a pandemic, Di Bratto put a pause on his business until the following year when his winter semester was nearing an end. He remained motivated by the work he did with Escalona— and with no summer job lined up in 2021 — Di Bratto began building a list of creators he would reach out to in hopes to recreate the luck he had the first time around.

On top of that, he taught himself the ins and outs of email campaigns, how to automate the email systems, how to price social media posts when pitching brands.

Then, after sending out dozens of messages, another client jumped on board. This time it was Mark Tilbury, a finance influencer with 7 million followers on TikTok. With Di Bratto’s help, Tilbury landed a partnership with a brand.

Now, with a few deals under his belt, Di Bratto felt more confident in his work. It was then he landed his “big fish” deal with Daniel Mac, a TikToker who found his rise by making videos around asking people in luxury cars what they did for a living. With Di Bratto’s marketing, the creator landed a partnership with investment companies Public and Wealthfront.

While he’s seen great success in a short time in this changing industry, he admits that his age sometimes makes people take him less seriously. Despite that, he’s stuck with his mantra: to just try and reach out, even if it seems impossible.

Most recently, Di Bratto brokered a deal between Floyd Mayweather’s NASCAR team and Momento NFT, a platform that allows creators to own and sell NFTs, to get a logo painted on one of the car’s doors.

He also landed himself a monthly consulting deal with an influencer marketing agency. “I couldn’t have done my Floyd deal without them,” he said.

While he’s figuring out his next steps, Di Bratto said he might delve into creating content himself as he sees first-hand how much success can come along with it, and said he’s seen content creators make more money than doctors and lawyers.

His advice for other young people looking to enter the influencer marketing space? Take the risk, and don’t take ‘no’ for an answer.

“I’m finished (this school semester) in three weeks, and for the next five months I’m going to sit in my room and write emails,” he said. “And I can’t lie, I cannot be more excited.”

Anyone can read Conversations, but to contribute, you should be registered Torstar account holder. If you do not yet have a Torstar account, you can create one now (it is free)

Conversations are opinions of our readers and are subject to the Code of Conduct. The Star does not endorse these opinions.

Mon Apr 11 , 2022
GroupM has published a new study titled ‘The Next 10: Artificial Intelligence’. This study examines how the media landscape and consumer behaviour will shift over the coming decade, in large part due to AI-enabled advertising that likely already accounts for nearly half of all advertising revenue, or more than US$300 […] 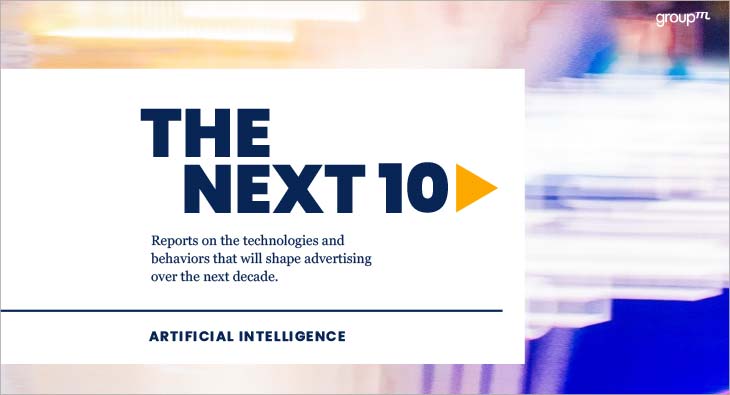