In late 2020, before vaccines were even available, I was part of a small group that estimated that airline business travel could drop by as much as much as 36% going forward. This study was a first of its kind since the pandemic began, and focused on the reason people fly for business and how likely changes in technology, personal risk perceptions, and changing business strategies would affect airline demand. For many month’s following this study, many airline CEOs and pundits continued to state confidently that business travel was on a full recovery, though with no idea just when that might happen.

Today, about 16 months later, we all know much more about the affects of the pandemic. Many of us are also vaccinated, and those that aren’t at least know they could be. Travel CEOs are now starting to publicly state that airline business travel demand has really changed. Sebastien Bazin, the CEO of the Accor Hotel group, has stated that he is not expecting 25% of the hotel’s business demand to return. Delta’s CEO Ed Bastian recently stated that company is looking to a new category of traveler, the premium leisure customer, to take the place of some lost business travelers. ESG initiatives at many companies have further targeted a reduction in airline business travel as a source for more sustainability. Given all of this, we got the band back together to revise our original 2020 study, and this time it looks like up to 40% of business travel may be lost for good.

Structure Of The Original Study

The original late 2020 study recognized business travel in seven categories, based on data sources and interviews with dozens of travel professionals. The idea was that the reason people may or not travel post-pandemic is at least partly related to why they traveled in the first place. At that time, the most at-risk areas for permanent demand destruction were seen as intra-company travel, conventions and trade shows, and commuters. The 19% to 36% loss prediction was based on estimated ranges of how technology and other issues might affect each category of travel, rather than treat business travelers as a homogenous block. While original, the study was treated by some in the travel industry with skepticism, but time has shown that it was a surprisingly accurate look at what would happen over the next year and half from its original publication.

What Has Changed In 16 Months

Over the last 16 months, the amount of airline business travel demand has started to reveal itself based on who is flying and who isn’t. The numbers quickly rebounded to around 60% of 2019 levels. Yet, that curve has flattened for domestic U.S. sales and is depressed even further for longer-distance, international business travel. The reasons are largely intuitive; the world has gotten more comfortable with video meetings, many businesses have adopted full-time hybrid offices, and complications of travel including mask mandates and consistently changing rules about quarantines and requirements has put a damper on business travel.

The chart shows the original ranges of business travel loss by category, and how this view has been updated for 2022. No changes were made to the categories most people think of when talking about business travelers —sales and support to customers. But remote access to fix IT issues has improved, making this category more at risk for people needing to fly for that reason. Trade shows are more permanently adopting a hybrid format, with some speakers live and some on video, and fewer live attendees, so this category is more at risk for airline business travel too. Lastly, work-at-home acceptance has made the small category of commuters by air more likely to see a greater reduction.

Despite the bullishness with which many travel leaders still speak of business travel returning, U.S. airlines are already starting to restructure their businesses for this reality. Capacity has been shifted to more leisure-oriented cities. Investors have put money into airlines that focus on leisure travel exclusively in the form of IPOs at Frontier and Sun Country, and new start-ups Breeze, Avelo, and Aha. American Airlines has made changes to their frequent flier program that create much more emphasis on credit card spend that actually flying on the airline. A new fare category at Southwest Airlines joins the chorus of people accepting that some travelers will pay more to get more, but is clearly focused on small business travelers rather than corporate customers.

Successful businesses watch what people do more than what people say, as revealed preferences show actual intent while stated preferences show only aspiration. By seeing the changes that airlines are making in their fleets, schedule structure, aircraft seating configurations, and loyalty programs, it is clear that they recognize the world of airline business travel has gone through a structural shift.

Implications Of This Structural Shift In Airline Demand

The implications of these new estimates of airline business travel loss are significant for the largest U.S. and worldwide airlines. Based on pre-pandemic fares, it took three to four leisure customers to equal the same revenue as a single corporate business traveler. That’s why the industry can’t just make up this loss with volume — there aren’t enough seats on the planes even if the increase in leisure travel was there. This newly identified, but yet to be fully quantified, category of premium leisure may reduce this ratio to two or three to one, meaning that not as many would be needed to replace the lost business travelers. While intuitively appealing and with some data suggesting these travelers may really exist, the size of this pool is not clear and how airlines will get these passengers to regularly pay a higher rate is also unproven.

A structural change in industry revenues, coming from a greater mix of leisure travelers (even if some are premium leisure), means that airline costs must be reduced. This could be done by adding seats to airplanes by reducing business class cabins and increasing the number of economy or economy-plus seats. It could also be done by further outsourcing of non-core activities in the general G&A and at airports. It’s not likely to come from labor rates, with pilot shortages causing flight cancellations and pressure on worker wages in and out of the airline industry. The market is efficient, and the reason that leisure-based airlines have received new investment is because it is these airlines that won’t suffer the loss of the corporate business traveler. This means a likely growth in share of the lowest-cost airlines, and a reduction in the marketing and pricing power of the larger, global airline networks.

A guide to your next business trip

Sat Apr 2 , 2022
Mar 26th 2022 Changi, Charles de Gaulle and Heathrow SHARP ATTIRE and a purposeful stride. The left-hand turn on the plane away from the cheap seats. Skipping the in-flight film to refine a presentation. Over the past two pandemic years these obvious giveaways of the globetrotting executive became a rare […] 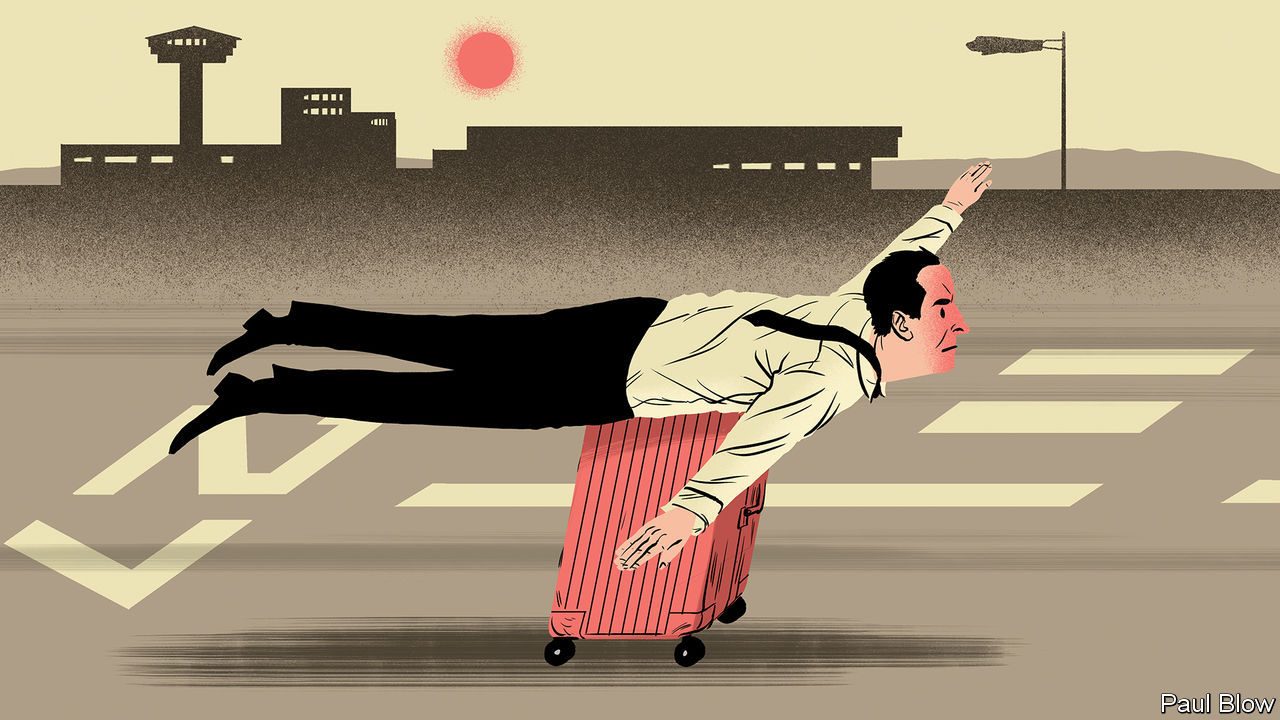